When a house fire destroyed their recently renovated retirement dream home, owners Rhea and Rob Athey decided to focus on the positive and start from scratch — this time including everything they needed to age in place.

When Rhea Athey first laid eyes on the turn-of-the-century character house near Swan Lake three years ago, she was smitten. Quaint and appealingly ramshackle, the cottage had been through various additions over the years and had a bohemian charm that suited Athey. While her husband Rob stayed in Ontario for work, Athey put her yoga teaching job on hold and moved in to oversee a number of renovations to make it suitable for their needs.

The couple would be moving permanently from Ontario to Victoria to be closer to two of their three daughters and their families, especially their 19-month-old grandson. Near the end of the renovation, with only a few paint touch-ups left to complete in the house, Athey returned to Ontario to rejoin her husband. Unfortunately, some paint rags left in a plastic bag by a worker ignited while she was gone, and the house went up in flames.

“I was devastated. My family and I had already spent our first Christmas there, and it was the house we were planning to retire in,” says Athey. “When our neighbours called to tell us the house was on fire, I was hysterical. My husband thought someone had died.”

Lost in the fire was the entire front portion of the house — the original charming cottage that had so appealed to Athey — along with a lot of her antique furniture and treasures. A few key items, including her mother’s hope chest, which she has since treated with ozone to rid it of the smell; and a box of Christmas teddy bears that she’s been collecting for 35 years, were saved. The house, however, was too badly damaged to salvage, so upon recommendation from experts, they made the decision to start fresh.

“We actually watched them bulldoze it down, which was kind of cool in a crazy way, but it brought a lot of closure,” she says. “It kind of signalled the renewal.”

After deciding to put the fire behind them and rebuild, the Atheys, with Rhea in charge, tweaked the layout of the house with new spaces to help them age in place. The 2,200 square foot home now has three bedrooms — a top floor master with an adjacent bedroom for their grandson — plus a generous main floor guest bedroom with an ensuite bathroom and walk-in closet, which can transition into a master bedroom if stairs ever become an issue for the couple in later years.

A Ping-Pong room — Athey’s husband’s only request — resulted in a 400-square-foot full-height basement games room with heated floors and ample sitting room for tournaments. Before the fire, the basement of the house had a ceiling height that rendered it useless for day-to-day usage.

“The rebuild was satisfying because it was far better than what she had,” says Tony Weaver, who supervised the rebuild for Downs Construction (and has since retired). “We were able to give her a way better house. Her old basement was five feet high and was relying on sump pumps, and upstairs the ceilings were only six feet and six inches high where somebody had developed an old attic that shouldn’t have been developed. What she got, there was no comparison.”

Athey was instrumental in the design and rebuilding process, from layout and materials to interior décor — and it’s clear that her vision was both cohesive and reflective of her, and her husband’s, eclectic personalities.

The main floor boasts a stunning wood floor, from Urban Timber, made with materials salvaged from old barns, resulting in a sea of planks that meld knotty honey blondes with the joyful anomalies of rich and pale browns.

“The biggest thing I wanted were old, reclaimed hardwood floors,” says Athey. “It was
an investment, but I love them.”

Old wood heritage pieces are a theme for Athey, who converted an antique dry sink from Quebec into the main floor bathroom vanity, and has well-loved Canadiana art pieces sprinkled throughout the home.

The main room off the entry functions more as a den, with brick tile around the fireplace by Ark@Home, and cozy lounge chairs for reading. Just behind the den, a covered area with a hot tub and seating offers easy access to outdoor entertainment.

“We tried to rebuild it with the integrity of the old house, but bigger and nicer,” says Athey. “Then we could do it exactly how we wanted it and make it a little bit more functional but I absolutely tried to keep quite a bit of the layout of the old house.”

In the kitchen, under sloping 11-foot exposed beam ceilings, striking distressed cement countertops are stained a matte dark brown with hand-chiseled edging that gives them a natural finish. The large centre island, home to a double apron sink and cabinetry, is connected to a massive slab of reclaimed wood from an old box car, created by Urban Timber, complete with the criss-cross scarring of train wheels and providing seating for four.

Rustic floating shelves, also from Urban Timber, show off a collection of well-loved robin’s egg blue pottery dishes above an earth-toned tile backsplash from Loki Tile & Fine Flooring. A six-burner gas range pulls together the kitchen’s functionality as a go-to place to cook, talk and eat.

“I wanted everything comfortable, so that if my grandson came over, it wouldn’t matter if he dropped something. It’s already distressed and worn in,” says Athey of her preference for reclaimed materials. “And there’s just something about old wood that you can’t recreate nowadays.”

Behind the kitchen, a comfortable, high ceilinged living room easily holds a large sectional and cushy easy chairs, with an adjacent dining table and powder room nestled effortlessly beside it. The cathedral ceilings and a window-filled back wall creates ample natural light and an easy flow to the back deck and fenced garden — itself a “work in progress,” by Athey’s standards.

Not Your Standard Project

Upstairs, high sloping ceilings and rustic pendants from Mclaren Lighting create a restful vibe for the two bedrooms — the master a spacious zone of rest with a massive dormer window above the bed. Due to the dormer’s sloping walls, Athey had to give up her beloved wrought iron bed in favour of a custom headboard of, you guessed it, rustic wood pallet panels.

A sliding barn door was added to the walk-in closet — a must-have for Athey, who had been hoping to incorporate one into the build. In the ensuite, a large soaker tub and a wood grain shower wall tile keeps the homespun theme going, complemented by a glass sink basin,  fixtures from Wolseleys and an antique stained glass mirror from one of Athey’s favourite antique shops in Ontario.

“It was a different project, with the high vaulted ceilings and big beams. It wasn’t your standard house,” continues Weaver of the build. “She [Athey] picked out some pretty funky stuff for the inside.”

With the house finished, Athey and her husband, who hasn’t quite retired, soak up the best of Victoria’s offerings every chance they get, though Rhea is now working on perfecting the flowers and potted plants on the front porch of her Cape Cod-style home.

“We are extremely active – we love running, biking, hiking and golf, which er can do here all year round,” she says. “Victoria is the best place on earth to live, it’s so incredible.” 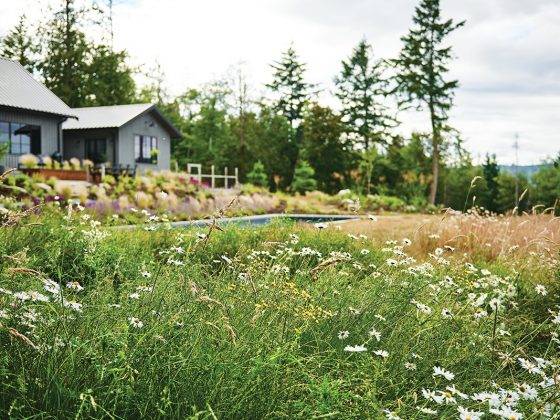 A Naturalized Approach to Landscaping 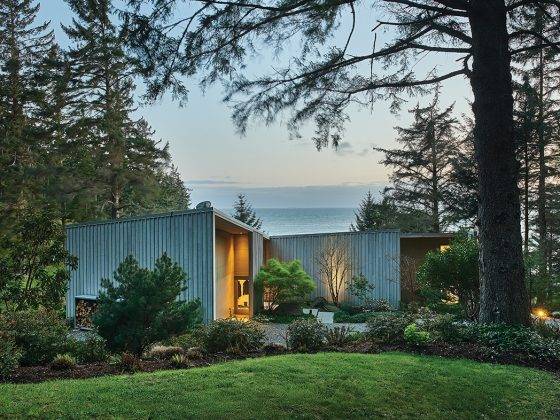 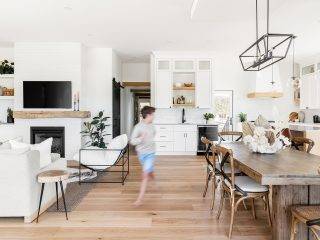 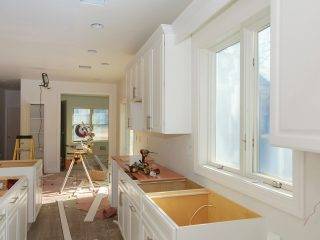