When Luis Ambriz-Gomez was asked to create a custom home in Victoria’s Uplands neighbourhood, he was given a very specific feature to model the house around: a grand, two-story radial staircase.

“That circular staircase was the centrepiece of the project, and everything else worked around it,” says Ambriz-Gomez, project manager with GT Mann Contracting. “The homeowners wanted it to be the focus from the moment you first walk in.”

The staircase is nothing short of magnificent, with 18 elegant oak steps, and custom-built curved oak handrails that curl at the ends of a rounded feature wall. In fact, this portion of the project occupied nearly a full month of building alone. Yet the rest of the 6,000-square-foot home holds just as much grandeur in each room, themed around a bright, traditional approach to a modern mansion.

“The client had real vision with this home, so the task was to make sure there was a cohesive and continuous style,” says Mari O’Meara, interior designer with Mari Kushino Design. “We wanted to duplicate the look of the staircase throughout the house, so we selected trim and mouldings that tied the project together.”

The project was so expansive that Ambriz-Gomez says it took the team nearly two years to complete, working hand-in-hand with the owners. The detail was so great, in fact, that the home won gold at the Construction Achievements and Renovations of Excellence (CARE) Awards with the Victoria Residential Builders Association.

“The homeowners have a love of the traditional, and that look never dies,” says Ambriz-Gomez. “There is a bit of a spectacular element in every room — especially in the office, which is made entirely from cherry, as well as the master bedroom and ensuite, which captures an expansive amount of space.”

With engineered hardwood oak flooring throughout the house, and shades of clean white in every room, the cherry office stands in dark contrast. Nick Robertson, owner of Ground Up Custom Carpentry, completed much of the construction throughout the house and says it’s rare to have the chance to work with such exclusively high-quality materials. The room was built from wall to ceiling in cherry, and the oak floor was laid out in a herringbone pattern. Ornate details decorate the space, including a herringbone-tile fireplace and built-in cherry cabinetry.

“The margin of error with everything you do in a situation like that is serious — if you cut something, there’s no going back. But it’s incredible to see people put so much forethought into the design and materials of the house,” says Robertson. “To have an extravagant playing field like that is not something you get the chance to experience every day.”

The master bedroom and ensuite stands out as another area of extravagance in the house and occupies nearly 1,200 square feet of space. The bedroom is outfitted with a stately equestrian mural painting above the hearth, French doors, his-and-hers walk-in closets and dressing areas. The bathroom hosts five different types of tiling, including full marble-style tile sheets in the shower, along with a glassed-in, dual-shower spa corner, pedestal bath, full-scale vanity, twin sinks and private water closet.

With three levels to the home, including a 10-foot-ceiling basement and playroom, and an entire children’s wing, the five-member family has room for entertainment and function, but delicate beauty plays a primary role throughout the house.

The oversized kitchen makes use of classic white cabinetry, with built-in camouflage for the dishwasher and fridge. The range stove is augmented with a pot faucet for convenience, and the whitewashed oak island is balanced by a trio of ornate pendant lanterns. The functional butler’s pantry and dining area just off the kitchen is contrasted with a formal dining hall around the corner. An open-concept living area opens onto a covered deck for expanded space, with ornamental cast stone fireplaces inside and outside providing warmth. The patio also features a barbecue cooking area and double heat pumps for year-round use.

O’Meara assisted the homeowners in creating a look that traded anything too trendy or textured for subtler, clean lines. Two areas that experiment with play, however, are the family room, with a patterned grey wallpaper from Cole & Son, and the girl’s private bathroom, with oversized floral wallpaper. Pattern also appears in the herringbone floor tile in the mudroom, boys’ bathroom and outer deck.

“We needed a few key places that create interesting visuals in the space, but that can also be enjoyed by the family,” says O’Meara. “A lot of the elements we’ve brought in can be found in nature, so it keeps up a modern and timeless feel with metals, glass and natural colours.”

Details around the house, like the Swarovski Arlington staircase chandelier, and parallel pendant lamps found throughout the home, enhance the grandiose charm that fits with the building’s majesty.

“This was a really special project, because my role was to make sure the vision stayed on track,” says O’Meara. “In this case, the client was coming to me with finishes and concepts and saying, ‘What do you think of this?’ It’s exciting to work with people who naturally have an ornate sense of taste and are willing to explore that to see what it can become.” 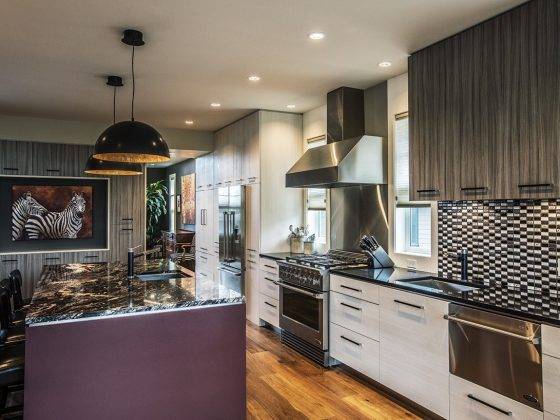 Incorporating Layered Lighting into Your Home 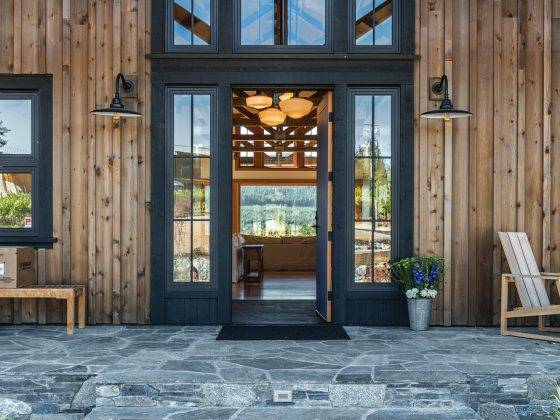