Perched up high, nestled in a rocky outcrop on the lee side of Anderson Hill in Oak Bay, this long and narrow three-storey house, with incredible views across South Oak Bay, the Victoria Golf Club and Juan de Fuca Strait, is one that had truly exhausted its look.

Time — and not just the cruelty of passing years — but a time, specifically the 1990s, had left her looking out of touch and passé.

Built in 1992, the five-bed, five-bath, 5,000-square-foot home, its exterior an unfortunate not-quite-pink-almost-crème-brûlée stucco was as dated inside as out. Reeking of a charm that had matched up well with oversize V-neck sweaters and leggings, the home’s teal tiling, aubergine walls, dark woods, lots of wall-to-wall, and 1990s light fixtures had not aged well.

“It didn’t have the rounded corners on the drywall, thankfully,” jokes project manager Chris Clark of Coast Prestige Homes of the house now known as Mise En Place, “but green carpet and just sort of ugly trim and terrible doors, those hollow-core doors, in a house that could potentially be worth $5 million.”

“It really had a 90s flavour to it and definitely lacked any kind of character,” adds designer Jenny Martin, principal at Jenny Martin Design. “That really played against the personalities of the new owners, who are so colourful.”

The new owners, Sue and Val Brown, a pair of psychologists, took possession in 2009, leaving the Shoal Point condo they’d been in for seven years. Dated interior design aside, the house was love at first sight.

Sue had been walking around atop Anderson Hill and felt the lure of the area before she’d even seen the house. “It’s a really wonderful design,” she says, “and not too big. The rooms are on a human scale.”

They were struck by the geometry of the space and the flow from room to room, although there was little design to tie each of the three levels together. “My feeling was that the house was going upwards and had no groundedness.” Clark saw a set of “good bones” in a stunning location, but he didn’t realize he’d be working on those bones on and off for three years, taking the entire interior apart and reassembling it.

It all began with a new deck
The deck was leaking, so had to be replaced. “And if we had to replace the deck,” says Sue, “let’s put some doors in the guest room. Once that was done we wanted to do the two guest rooms and their bathrooms.”

Clark introduced the couple to designer Jenny Martin, who helped define a style that could carry through the house — a marriage of Val’s taste for the contemporary and his wife’s love of the more traditional, opting for a timeless elegance.

Flooring is predominantly white oak with walnut inlay from Island Floor Centre, done in a signature herringbone pattern and featuring Celtic knot patterns in the four corners of rooms. New Zealand wool broadloom is underfoot in the bedrooms.

“Keeping it timeless helps keep it cozy and inviting,” advises Martin. “The palette was very neutral, softer wood tones, lots of whites or off-whites. And the view is spectacular. Anytime you have a place where your windows are your artwork you don’t want really loud walls that compete with that.”

For Martin and her team it was exciting to have clients so open to the design process and keen to let them try new things.

“They got excited about the same type of things we designers get excited about. I think that’s what naturally led it to be as impressive as it is.”

The bathroom inspired by a rock star
The most spectacular, and challenging, job in the project was the 20-by-13-foot master bath, styled after rocker Lenny Kravitz’s Paris apartment bathroom. During the concept stage, while thumbing through images of impressive bathrooms, the owners encountered a photo of it.

The centrepiece steam room/shower is made of Calacatta Caldia marble encased by floor-to-ceiling glass, with eight massage jets, two sets of wands and a rain hat. On either side are two long marble benches.

Across a floor of glazed porcelain is Sue’s BainUltra Essencia oval free-standing bathtub with 46 air jets for a ThermoMasseur experience. There are heating units built into the floor and back of the tub and hideaway LEDs in six colours for therapeutic chromotherapy. And the tub even dries itself. According to Sue, it’s the most ergonomically suited bathtub in existence. She knows. During a three-day search in Vancouver, Sue sat in more than 100 tubs.

“It’s very hard to find an ergonomically designed tub,” she explains. “They’re mainly designed by men who do not sit in them.” The bathroom is the element Clark’s most proud of. “It was a head scratcher, but it turned out fantastic.”

Details hidden and not so hidden
There’s a solid 10-by-5-foot wall of marble in the kitchen. One immense slab is a magnificent backsplash. The piece was so big it had to be lifted in to the house by a crane.

The kitchen, which is not enormous, is an exercise in precision storage. Four years ago, Sue went to chef school and has accumulated, as Martin likes to say, “every single kitchen appliance known to man.”

“I remember when we were getting started on the kitchen we went through an incredible inventory with Sue. That’s kind of where ‘mise en place’ came from, ‘everything in its place.’ Nothing in that kitchen was by chance.”

Sue got rid of her Aga cooker and replaced it with a 48-inch dual fuel Wolf range. Above it hangs a custom range hood so powerful it automatically triggers a makeup air handler to return to the room some of that stolen air, which emerges warm at foot level.

Sitting down with the Browns in one of several sitting rooms, Val asks me if I like the large painting over the fireplace. Sure. But then he flicks a remote and the painting flips around to reveal a flat-screen TV. What you don’t see is hydronic in-floor heating and a comprehensive automation system by tekmar Control Systems that regulates lights, heat, music and even humidity via a series of sensors that are flush with the drywall.

Sue says the toughest part of the renovation was when they were measuring progress by how much more they’d destroyed, but adds, “This is our 30-year house.” And only three of those years have been taken up by renos.

Asked when the couple is going to tackle the exterior of the house, updating the stucco, Sue grimaces. “A couple of years.”

Are you looking forward to it? “No, but we’re used to it.” 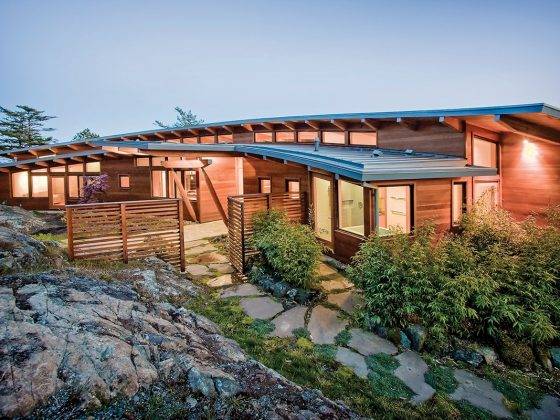 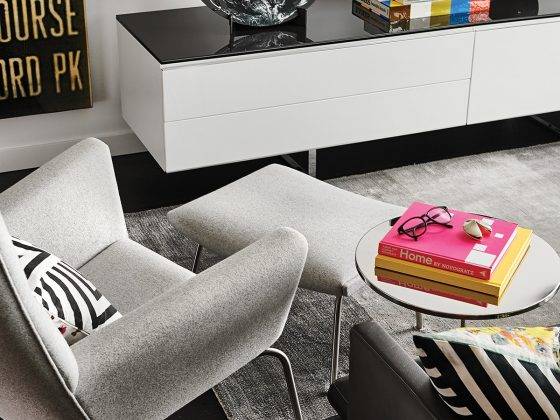 The Art of Urban Living