This ultra-efficient passive home delivers on its owners’ eco-minded goals.

You might stop and stare when you wander past this tall, rather simplistic-looking house on a leafy street near Playfair Park. But there’s nothing catching the eye to suggest the two-storey, single-family home, with its barn-like Scandinavian Modern flair, is a vision of the future.

It’s an ultra energy-efficient Passive House that doesn’t announce its green-leaning distinction with straw bales for walls, muddy grass for a roof or odd attachments poking out like alien antennae.

But within its thick walls, the building is kilowatt hours and gigajoules ahead of its neighbours, costing a fraction of the price to heat and cool.

Brian and Charity Calder were well versed in the language of Passive House by the time they decided to build in late 2017. They’d been inspired by a visit to an eco-house but felt features like a composting toilet and cob construction were a little out of their comfort zone.

Curiosity led them to a seminar on Passive House; a meeting with their future builders, Interactive Construction; and more answers about the necessarily rigorous and measured standard of fabrication.

“As this was to be one of our largest investments, we felt that we needed to build a house that would be relevant for the next 100 years, so that it would be future proof when, and if, us or our children decided to sell,” says Brian.

The Calders asked themselves what features an eco-modern, new build promised, what it delivered and how affordable it would be.

“Crazy as it seems,” adds Brian, “we felt that a modern house would help pay for itself. It couldn’t be a consumer of money. It needed to be a producer.”

The overhang detail at the back serves both form and function. For thermal efficiency, the side walls that join the roof are structurally separate from the main house with only the siding connecting it continuously for appearance. The walls don’t act like cooling fins. The Calders have installed a dozen solar panels and hope to add another 16, which will bring the house very close to net-zero energy consumption. Overall, building costs were less, per square foot, than the average for a custom home in B.C. — just over $300/ sq. ft. for this house.

In one sense, Passive House is a misnomer. There’s nothing passive about its commitment to energy savings and sustainability.

Energy costs (heating and cooling) can be 90 per cent less than in a typical modern house, built to code. That’s not only significant, says the home’s architect, Will King of Victoria’s Waymark Architecture, it’s like cutting your monthly energy bill in half and then in half again and again and again.

“Ongoing maintenance and operating costs are as close to zero as you can get. Those were (the Calders’) goals.”

At 2,600 square feet, three bedrooms, two bathrooms, and including an office, plus a two-bedroom suite, their Passive House isn’t tiny, but there’s no basement or garage — two spaces of energy leakage. And without them it was simpler to insulate the building envelope, key to a Passive House, which is like a normal

house with more insulation, more air flow and less energy lost to the outside.

“A Passive House may be best described as a high performance house,” suggests Brian. Heat coming in through the windows is trapped along with heat generated within by appliances, people, etc.

Interactive Construction co-owner Russ Barry explains that the heart of the Passive House is the heat recovery ventilator, which pulls fresh air inside and pushes stale air out. The incoming air is passed through what’s basically a little radiator. Heat from the outgoing air is recovered and warms the cool air entering the house.

“You don’t have to reheat your air all the time. The key to these houses is not throwing that heat away.”

The project marked Interactive’s third Passive House. They begin work on their seventh this fall. The challenge, says Barry, is thinking ahead, having builders savvy in Passive House techniques and ensuring the envelope is perfectly sealed.

The entrance foyer and master bath both exemplify clean lines and a somewhat European feel. Avoiding spaces where air can get trapped defines Passive House construction — you’re comfortable everywhere all the time. “The inside of the windows are warm to the touch even in winter,” says homeowner Brian Calder. “With a constant flow of air around the house all rooms have similar temperatures and there are certainly no drafts. The exterior doors have seals all the way around, sealing like what can best be described as a submarine door.”

“One of the primary (challenges) to have it go successfully is there really needs to be a lot more upfront work.”

Insides of windows are warm to the touch, even in winter. And the continual flow of air means all rooms have similar temperatures. Because the heat stays in and stays constant, the Calders now only notice temperature changes and drafts in other houses they visit.

“Another client likened it to a weightlessness,” says Will King. “No hot spots or cold spots. All surfaces are the same temperature. You don’t have to wear wool socks in this part of the house.”

Air quality is also superior because the air turnover far exceeds that of a standard house, so the interior never feels stagnant.

“My mother just visited,” says Brian. “She lives in an air-conditioned house and couldn’t say enough about how much she enjoyed the fresh air.”

Another bonus to the airtight walls, triple- pane windows and 14-inches of insulation is the quiet.

The reference to a Passive House comes from the German: Passivhaus. That country emerged as a leader in ultra-low energy structures after the idea was conceived there in 1988 and then realized two years later with the construction of four row houses. Since then, thousands of Passivhaus units have been built, the majority in Germany and Austria.

For the Calders, the only noise comes from inside the house, and since sound travels very well through the structure, as long as the doors are open, the couple can talk to each other from almost any room without raising their voices.

According to the architect, there’s nothing arbitrary about Passive House design.

“Every move you make has an effect on how heat energy moves through the building,” says King. “The house has the fewest number of corners and jogs and details, so the cold air won’t seep in, and the hot air won’t seep out. You can’t leave anything to chance, and I find that very satisfying.”

For the Calders, it all fit together perfectly.

“Really, without architects like Waymark and a builder like Interactive Passive House would have remained as an abstract idea,” Brian says. 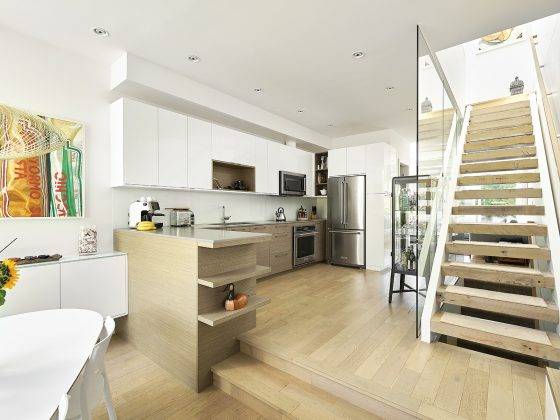 The Appeal of Townhouse Living 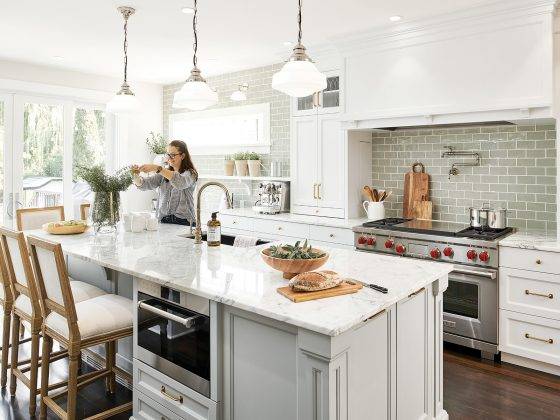 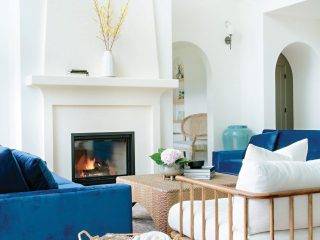