A water feature brings a soothing focal point to this striking naturalized landscape created on a reclaimed area fronting a golf course.

Richard Woo had one thing on his landscape wish list. “I always wanted a water sphere,” he says. Woo had been inspired by a large granite orb he’d seen turning in a shallow water container outside a resort on Grand Cayman.

He and wife, Carla Anderson moved to their 4,300-square-foot home on Compass Pointe Place at Bear Mountain three years ago. The home sits on a half acre overlooking the golf course, with enviable mountain views in the distance.

They initially hired Mary Haggerty of Mary Haggerty Designs to transform the area at the back of the house to create privacy, but she had an even bigger vision for the area. A rocky chunk of the land had been fenced off, seen as an unusable spot and overgrown with scrub plants. Haggerty immediately suggested the fence should go and the space could be made usable and beautiful.

Luckily, water also played a big part in Haggerty’s plans and Woo would get his water feature dream. Haggarty chose a 40-inch stacked slate sphere fountain from Ontario-based manufacturer Aquascape and designed a large, stone-lined reservoir to house it. To heighten the tranquil atmosphere, she moved a small Buddha from another spot in the garden close to the base of the sphere.

Unlike the smooth-shaped water feature Woo had admired, this sphere is rustic and tactile, echoing the rocky outcroppings on Vancouver Island. The fountain flow can be regulated to get the most pleasing sound. It’s perfect, Woo says: “It’s very calming, very peaceful, relaxing. It calms you right down.”

Haggerty often includes water in her landscape designs. In fact, the sphere is one of three water features on the property. There’s a hot tub oriented at an angle for the perfect golf course view. It sits in a pergola that has lights for evening relaxation and shades to create privacy.
A free-form, kidney-shaped pond with a central water spray is the dominant feature of the formerly unused area. With two slate-coloured wooden Muskoka chairs nearby, it’s a pleasant place to sit and admire the increased number of birds that are drawn to the pond.

“(Haggerty) had the vision to open things up and make it this beautiful oasis,” says Woo.

Haggarty, who has a varied resume that includes a diploma in landscape design, believes everyone should have a water feature in or around their home. She has another diploma in architectural drafting and a third in textile design, along with more than 30 years as an architectural technician. She’s a kitchen designer, artist and weaver.
Haggerty brings all of these elements to her work, saying she sees herself as both a landscape designer and a landscape artist. Haggerty lived and worked in the Caribbean for 12 years.  When she was building her home there, she even toyed with the idea of adding a small stream that would flow under a glass cover into the house and through the other side.
Water brings energy to a space, she says, along with a sense of calm carried both by the restful view and the sound of moving water. It also creates energy with motion and activity with wildlife, and can act as a play area for kids and pets.

Haggerty saw the rocky, unused area as something that could be beautiful. The fence came down. The scrub plants were cleared, leaving the native species. A thin, unusable strip of land down the side is now a secret staircase that adds visual interest.

“I don’t blast rock,” says Haggerty. “So, I worked with it. I worked with what Mother Nature has given me. And you don’t mess with her.”

Haggerty drew the pond outline freehand with spray chalk, so the design followed the curve of the rocks and land. Haggarty also knows her plants. She worked at a nursery in Ontario for a spell, where she was in charge of water features. Planting comes last, she says. A few years ago, she visited the gardens at Palace of Versailles in late fall. The bare gardens let her see the magnificent layout and design of the outdoor space.

“The structure is the important part,” she says. “You can stick any number of plants in but if you don’t have a good structure, there’s just going to be a mess. I lay out all the spaces first. ”When clients ask about plants, Haggerty tells them to think of trees, shrubs and flowers as the earrings. The dress comes first: “That structure, to me, that is key.”

Haggerty leans towards native and deer-resistant greenery. She selects plants that suit a site. As much as a client may crave a delicate Japanese maple, if it’s windy, it won’t thrive.“

She’s very much an environmentalist,” says Anderson. “She has great vision.”

As a golfer, Haggerty also appreciates the property’s course view, which inspired the colours for the landscape design palette. “You’ve got the green behind you. You can probably use stronger colours,” she says. The water sphere is a natural dark brown-green shade. For the hot tub pergola, she chose a dark wood frame and rich cedar slats. It all works together for its pleasing effect.

As Woo says, “what she did was so calming and peaceful.”

Landscape designer Mary Haggerty worked around existing trees, including a stand of arbutus.

Bald Eagle Landscaping built the pergola and all the stonework, including the Island-quarried Buckskin slate flagstone in the seating area. The rugged-edged water sphere has an adjustable water flow.

Strong, natural colours and water features are key elements of the Compass Pointe Place home’s landscape design. Haggerty chose plants that “deer are less likely to dine on,” including lithodora, callistemon, creeping phlox and a small Norway spruce. The finished project is an oasis, says client Richard Woo. It makes the most of the golf-course view and incorporates several water features, including the hot tub, pond and bubbling water sphere. 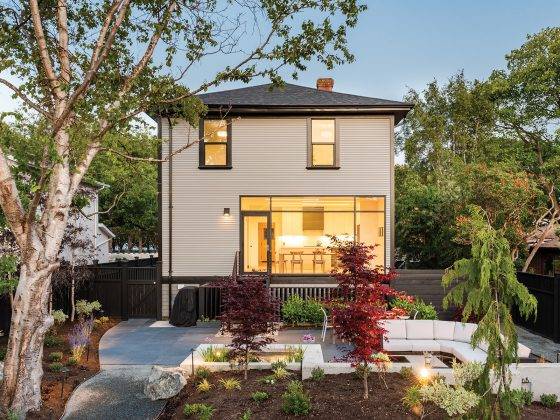 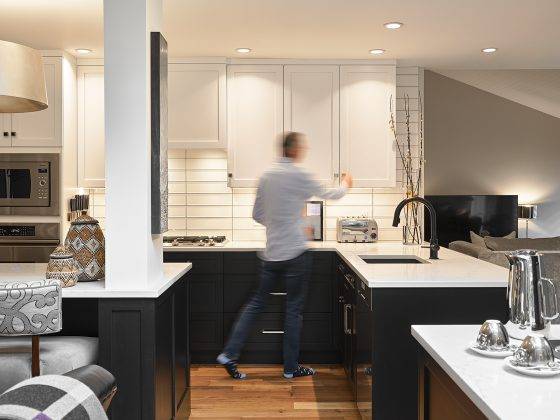