Nothing quite prepares you for the view from Kerry Brown and Richard Larkin’s penthouse condo in Bosa Properties Encore development. The bigger picture offers an expansive panorama that extends from the Inner Harbour across to the Olympic Mountains; a closer look reveals the fascinating activity of a working harbour, from whale-watching boats and water taxis to seaplanes taxiing out for liftoff.

“When people come over they just get awed,” Larkin says, with a sweep of his hand to take in the vista.

Brown and Larkin — among the first buyers into the project — secured one of the two penthouses in the five-storey building of the two-tower development. They moved from a custom home in Broadmead, where they had lived for 20 years.

“The positioning of the buildings relative to the water and the growing community was very important to us in our design and development, both to maximize views and also to create a strong sense of privacy for homeowners within the community.”

“We were at the highest peak in Broadmead, up at 350 feet above sea level,” Larkin says. “We actually had this same vista but looking down on the city. It was almost the same kind of view. We were just farther out.”

When their son moved out, the pair decided it was time to consider downsizing, especially given the constant upkeep required on the 4,300-square-foot home, which sat on two-thirds of an acre.

“Our parents, both Richard’s and mine, had retired in Victoria in the James Bay area,” Brown says. “They had downsized and we saw them really enjoy the downtown kind of living.”

Luxury Lifestyle
While Brown was not initially sold on the idea of a condo, memories of living in Europe in her younger years, and falling in love with the lifestyle, made her realize the Bosa project could offer some of the things she appreciated about that time.

“I liked the ability to be able to get groceries every couple of days and walk everywhere,”she says.

While not in the downtown core, the building is close enough that the couple can easily walk to the Inner Harbour, but they get to live beyond the noise of downtown.

“This is just enough out of town,” Larkin says. “We can pop over to Save-On, and it’s only 10 minutes to go across the bridge and we’re at Il Terrazzo, or 20 minutes to the Union Club.”

In addition to easy access to downtown and a high walkability score, Brown and Larkin had other important criteria. To make the big move to condo life, they required an elevated and expansive view, lots of natural light and outdoor space.

“Encore was designed to embrace the waterfront, mountain and city views, afforded by its unique location overlooking the harbour,” says Wayne Vickers, VP of Development at Bosa Properties. “The positioning of the buildings relative to the water and the growing community was very important to us in our design and development, both to maximize views and also to create a strong sense of privacy for homeowners within the community.”

The building also boasts amenities which Vickers says are designed to support residents’ sense of peace and calm. Highlights include the private outdoor pool and heated cabanas, and an outdoor kitchen and barbecue area, which overlooks the community’s expansive green space. “A lot of times it feels like we’re living in a resort,” Larkin says.

The Personal Touch
Buying early in the development process meant the couple was able to do a lot of customization to the unit. They tinkered with the layout so the master bedroom’s walk-in closet no longer took up a valuable exterior wall. By moving that closet to the interior and moving out the ensuite, the soaker tub was able to have a striking floor-to-ceiling window backdrop.

They got the suite with no backsplash tile or light fixtures, and no wood finishing, then worked with interior designer and friend Patricia Neilson to create their ideal esthetic.

“We didn’t bring any furniture from our house,” Brown says. “The proportions were all wrong. In a condo, you want things to be multi-use, and you want them to work with the scale of things.”

A convertible Calligaris Orbital dining table from StudioYdesign that expands to fit 10 people and a cozy, custom-made sofa means the couple still gets to host dinner parties — and show off that view.

“One of the things that we hadn’t realized that we would appreciate so much is the activity down here,” Brown says. “To see when the wind changes, to see the planes take off from different directions or struggle. All the little harbour ferries are so cute fighting the waves. We can see both the sunrise and the sunset. There isn’t a day we don’t say to each other, ‘Oh! Look at that!’” 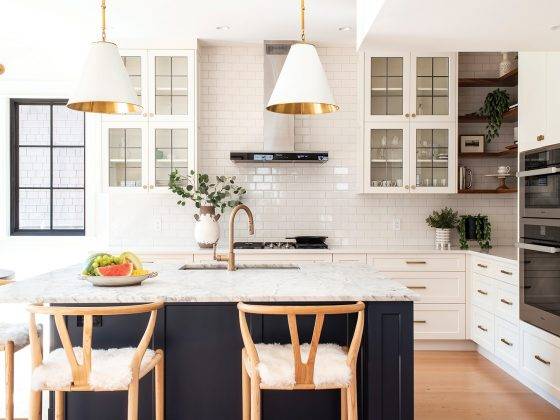 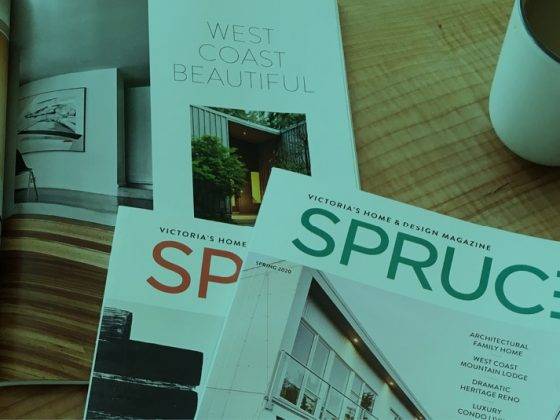 A Message from the Editor